45 minutes in, Alex’s dart into the circle secured a penalty corner. Captain Kate Walsh took it and drove the ball at the goal. Danson shot it past the goal minder  to secure the first goal of the match and her fifth goal of the tournament.

It was the first Olympic medal won by a British women’s hockey team for 20 years. 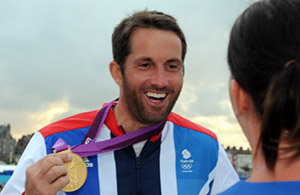 Ben Ainslie has won his fourth straight gold medal to become the most decorated Olympic sailor in history.

He came ninth in a close Finn medal race in Weymouth to beat rival Jonas Hogh-Christensen.

To celebrate after crossing the line, Ainslie set off a flare and held up a Union Jack flag as the huge crowds cheered his success.

At the Closing Ceremony, Ben had the honour of holding the Union Jack flag on behalf of Team GB.

The post box in Lymington was painted gold – but not by Royal Mail. Although the restaurant owner that painted the post box was arrested, royal Mail changed their mind and allowed the post box to stay gold at the request of Ben.

A special edition stamp featuring Ben during his medal winning race was released by Royal Mail.

They had sailed exceptionally and entered the final race with an eight-point lead over Brazil’s Robert Scheidt and Bruno Prada.

Sweden however, were the team that finally denied them a gold medal.

They needed to finish sixth or higher to beat the Swedes but they suffered on the final downwind and moved from fourth place to finish in seventh.

“I don’t think we expected to break the world record in every single ride that we did,” she said.

Born in Southampton and schooled in Hamble-le-Rice, King has done Hampshire proud.

Bronze for Foad and Partridge

The British crew briefly led mid-way through the race, but Germany and defending Olympic champions Canada came back at them over the last 500m in an exciting race.

The last day of sailing was cancelled because of a lack of wind which meant that the standings from race 10 became final.

Helena  dominated the 16-boat fleet all week and proved that she deserved her gold medal – an ambition she has held since she was 13.

“It hasn’t quite sunk in yet” she said.

Winchester Cathedral Outer Close played host to a giant outdoor screen showing live coverage of The Games. It was one of only 16 live sites in the country.

The Olympic Torch spent more time in Hampshire than any other county. It had two overnight stopovers which were marked with evening celebrations.

The Flame first entered Hampshire on 11th July at Basingstoke. It then travelled to Kings Worthy, Winchester and Andover. On 14th July, it travelled to Lyndhurst, Brockenhurst, Lymington and Totland. It then crossed to the Isle of Wight, returning to Hampshire again at Southampton where it staedy overnight. Evening celebrations took place in Mayflower Park.

On 15th July, the Flame left Southampton, bound for Fareham, Bridgemary, Gosport and Portsmouth (where it will stayed overnight). Evening celebrations took place in Portsmouth at Southsea Common. It left the county on 16th July.

Lord Sebastian Coe, chairman of the London Organising Committee of the Olympic Games (LOCOG), said: “The Flame symbolises the Olympic spirit, and its journey around the UK will bring the excitement of the Games to our streets.”