One of Southampton’s tourist landmarks has just announced its 2013 sailing programme, ahead of a busy year that will mark its 25th anniversary ‘in preservation’. 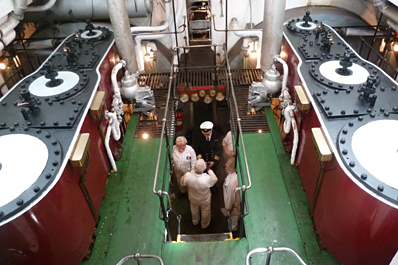 The SS Shieldhall, the largest steamship of her type still operational in Europe, was purchased by charity the Solent Steam Packet Limited in July 1988, and is maintained and manned entirely by volunteers.

The 2013 programme sees the Shieldhall mark its anniversary by participating in a number of special events, including the Southampton Maritime Festival on the Bank Holiday Weekend 5-6 May, the ‘5 Cruise Ships’ gathering on Sat 8 June and Cowes Week Fireworks on Fri 9 August. New for 2013 will be the opportunity for passengers to enjoy taster two hour cruises of the Solent for just £12 per person (£6 children).

Managing Director Graham Mackenzie is optimistic about the year ahead. ‘Whilst the Shieldhall team is awaiting an announcement from the Heritage Lottery Fund that may help secure her future, our volunteers have had a busy winter conducting day-to-day maintenance necessary for a ship of this nature. We’re all looking forward to our 25th anniversary year programme, commencing with a special opening and sailing for the Maritime Festival. This promises to be a weekend of celebration with a Lancaster bomber flypast, displays from WWII re-enactment societies, a gathering of Dunkirk ‘Little Ships’ and a welcome return to Southampton following restoration of the steam tugboat ‘Challenge’. Passengers aboard the Shieldhall not only get an unbeatable view of the busy docks and Solent sights but on sailing dates are also treated to the sounds and smells of a busy engine room with working steam – the Shieldhall is very much ‘Heritage in Action.’ We’ve put together a 2013 programme that we hope will appeal to all. We’re encouraging as many people as possible to experience our unique ship, part of the National Historic Fleet. We pride ourselves on our hospitality and welcome, and wish to share and mark our silver anniversary in style.’

Sunday 5 May, Southampton Maritime Festival – In steam alongside from 13.00-18.00. Guided tours available. No charge, donations welcome.

Saturday 7th September – Merchant Navy Day Excursion. A short service of remembrance and a wreath laying, for those that wish to do so. A day to remember. Depart 11.00, Return 16.00. Tickets £30 adults, £15 children.