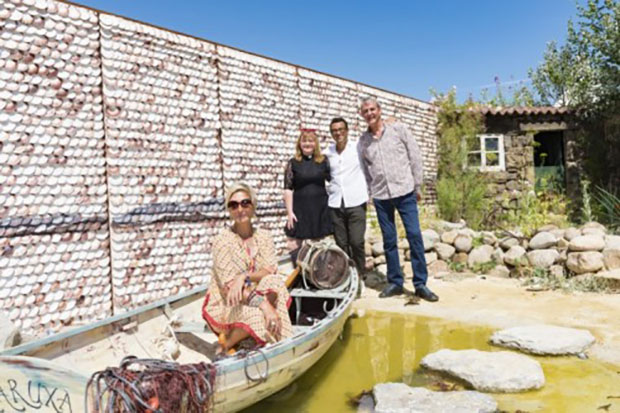 ‘Rias de Galicia: A Garden at the End of the Earth’

Following the success of the recent BBC TV series, which saw a cast of seven including actor Morrissey, TV reporter Rowe and Radio 2/Gogglebox vicar Bottley tackle a 780km pilgrimage across northern Spain in 15 days, this acknowledged their contribution to raising the profile of the Camino and Northern Spain as a visitor destination.

Rose has brought to life the breath-taking Atlantic coast of north-west Spain in the show garden collaboration with the Spanish Tourist Office and Tur Galicia. Rose lives at Dipley Mill near Hook.

The RHS Hampton garden, which scooped a silver RHS medal, evokes the extraordinary landscape of the Rías De Galicia; the estuaries on the rugged Galician coast. Secluded coves are dotted throughout this region and McMonigall celebrates these coastal havens, their wild flora and the local tradition of shell-cladding, as well as giving a nod to the delicious local seafood.

Designer Rose McMonigall said, “I was inspired by my visits to Galicia to paint a picture of an idyllic scene, a secluded beach on the Atlantic coast, glimpsed through pine trees, with the ultimate hideaway of a fisherman’s cottage nestled amid the wild-looking vegetation.”

Javier Piñanes, director of the Spanish Tourist Office in London said, “In partnership with the region of Galicia, we are delighted to be collaborating with RHS Hampton Court Palace Flower Show and garden designer Rose McMonigall this year. Galicia is a very unique, spiritual and cultural destination with an outstanding coastline strung with dramatic cliffs and pretty fishing ports. The interior offers a labyrinth of valleys and hills and is one of Spain’s most green and vibrant regions. We are excited to be bringing a slice of Galicia to London this year and look forward to showcasing some of the highlights at the Flower Show.”