Exactly one year after his incredible Man Overboard rescue in the North Pacific Ocean, a round-the-world sailor has released a book which details his incredible fight for survival.

Andrew Taylor, 47, a novice sailor on the longest ocean race around the planet – the Clipper Round the World Race Yacht Race – was hit by a huge wave and swept overboard on 30 March 2014.

The rescue operation began immediately but the task was made all the more difficult by the violent storm. After 100 minutes in the freezing water, Andrew was rescued against all odds by his team mates on board the Derry~Londonderry~Doire yacht.

Today he released his book, 179W – One Seven Nine West – named after the exact co-ordinates where he fell overboard.

Andrew said: “I have always considered myself lucky to be fit and healthy and able to travel the world experiencing adventure and pushing some of the boundaries of life. I am under no illusion however. I am a very lucky boy to have escaped this particular life adventure alive. 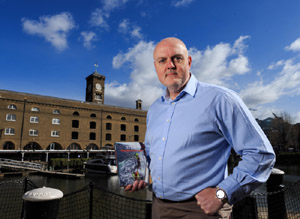 “Many of the fleeting moments on that fateful day in March 2014 could easily have ended differently. As could have the subsequent story’s ending.

“If I still had nine lives at the moment I became the ‘Man Overboard’, I definitely used more than one of them in escaping this.

“I genuinely believe as a result of some of the outcomes of this event, lives will now be saved in the future. For both this and escaping with my own life, I am totally humbled and shall be eternally grateful to many very special people.”

Clipper Race organisers have subsequently worked with technology partners Spinnaker International and McMurdo Group to develop a new automatically activated personal AIS beacon which will speed future rescues following the lessons learned from Andrew’s experience. It is currently in a prototype testing phase.

Legendary British sailor and Clipper Race founder Sir Robin Knox-Johnston commented: “Reading Andrew’s account one year on was very emotional. His team – led by skipper Sean McCarter – did an exceptional job in recovering him. We have learnt a lot of valuable lessons from the rescue and as a result are now developing new technology for a range of AIS beacons.”

Aside from the Man Overboard moment, Andrew’s book details his team’s inspiring experience in the challenging Clipper Round the World Yacht Race which started in St Katharine Docks, London in September 2013 and finished back there in July 2014 after 40,000 nautical miles and six different continents.

The book launch took place today overlooking the Clipper 2013-14 Race village. Andrew’s skipper and key crew mates involved in his rescue were present, plus his daughter and mother and father who were his inspiration to survive.

All proceeds from the book will be split equally between The Ellen MacArthur Cancer Trust and The Newmarket Day Centre. Copies of the book can be ordered online at www.179w.co.uk

Clipper Ventures, based in Gosport, organise the Clipper Race which was founded by Hampshire based sailing legend Robin Knox-Johnston. Boats are crewed by amateurs with help from professional skippers.