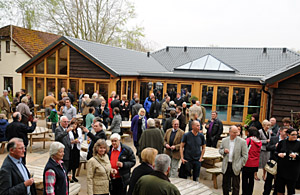 He started by giving an interesting speech about the former incarnations of the restaurant, including the very first one in 1966 – a timber clad caravan in the car park which was frequented by scarlet macaws with a penchant for drinking visitors’ coke and letting the air out of the tyres of their parked cars.

He performed the ribbon cutting ceremony in front of an audience of invited guests including  the Mayor of Andover, Cllr Zilliah Brooks, the Rt Hon. Sir George Young MP, representatives from funding body Plain Action and local business leaders and Trust supporters.

After the ribbon cutting, the Trust put on a short flying demonstration. One brave little robin took his chances when it perched on a post next to Nigel the Southern White-faced Owl but Nigel spared it. The display ended with the Trust’s now  trade mark display of flying vultures as close to the heads of the crowd as possible. As they said “if it looks like it’s going to hit you, it probably will, so duck.” 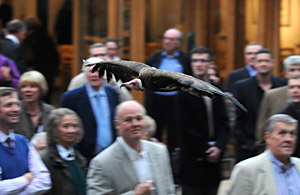 The Trust’s Chairman, Marion Paviour, said “We are tremendously grateful to all those who have helped to bring this building project to such a successful conclusion; not least Clive Pedlar Associates Ltd who were the architects responsible for the design. The building is quite magnificent and represents an enormous opportunity for the Trust to develop further its visitor numbers and consequently its work of education through entertainment. I hope that everyone will come and enjoy the atmosphere of Feathers as well as sampling its delicious fare!”

The restaurant took six months to complete but it now provides a purpose-built facility that can seat 120 people.  With direct access from the car park it now offers locals an informal place to meet up and with the A303 so close, it can also be used as a corporate venue.