Expectation is rising amongst the volunteers at Hollycombe, Liphook, who are looking forward to the attraction re-opening at Easter. And this year there is much to look forward to, not least with the return to full working order of Mr Field’s Steam Circus, the world’s oldest surviving mechanically operated fairground ride.

The ride is believed to date from the late 1870s, and features a set of Savage platform horses, or Dobbies. These were the fore-runner of the Gallopers (which can be ridden at Hollycombe next to the Steam Circus), a later development which saw the introduction of an additional ‘galloping’ motion compared to the Dobbies circular motion. Mr Fields Steam Circus is driven by a Savage steam centre engine and riders are entertained by an 1880s 62 key Gavioli trumpet barrel organ.

‘Because of its age we do not run the Steam Circus every day we are open’ explains Hollycombe Trustee Brian Gooding.’ ‘Easter though marks a special occasion. We needed to embark on extensive restoration work on the Dobbies three years ago – a painstaking but rewarding programme for our workshop team, and we are thrilled that the ride is now back in working condition’. 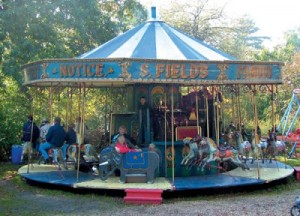 Overseeing the restoration has been Hollycombe’s Karen Feltham. ‘When you are restoring the world’s oldest mechanically operating fairground ride, you realise you are taking on quite a responsibility’ said Karen. ‘There is not another ride like this anywhere. We have not only replaced and serviced many of its component parts but have painstakingly painted the fairground ride façade so that come Easter it can be seen in all its glory.’

But once Mr Field’s Steam Circus is re-opened, it doesn’t mean that Karen’s restoration duties are complete for the season. Hollycombe is celebrating for an additional reason in 2015, marking the centenary of the world’s oldest Haunted House. Built by Orton and Spooner in 1915, the Haunted House has been one of Hollycombe’s most popular attractions, but it will take a spring and early summer break from the Fairground whilst some of its original features are re-introduced. ‘Yes, the Haunted House will mysteriously disappear for a short while’ explains Karen. ‘But our work programme will see it re-open in the summer, with all its creaking floorboards, eerie noises and ghostly figures ready to give visitors a gentle thrill. And this year, especially to mark the Haunted House’s 100th birthday, we are going to open on Halloween, Saturday 31st October. There will be lots of surprises in store – we can’t wait!’