Started in 1996, Laverstoke Park Farm was originally a hobby and a way for 1979 F1 Drivers’ Champion Jody Scheckter to feed himself and his family with quality food. It has since grown to a 2,500 acre farm serving the public and supplying some of the country’s supermarkets and top restaurants.

Jody explained the moment he went commercial:  “The farm came up next door so I bought that and we went from 530 acres to 2,500 acres and that’s the time when I said I’m going to do this.”

The farm employs 160 staff and is home to wild boar, pigs, cows, chickens, sheep and buffalo. There is also a vineyard, hops, a dairy factory, soil laboratory, abattoir, compost plant and more. 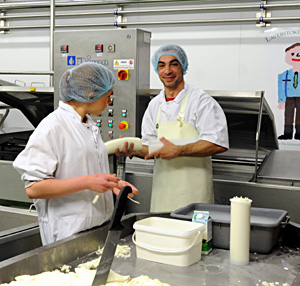 Buffalo are not the first animal you would think of finding on a Hampshire farm but they fit with Jody’s ethos perfectly. The farm is all about producing the best tasting, healthiest food without compromise. Jody explains: “Part of how we produce the best tasting healthiest food is we follow nature very strictly and we are organic and biodynamic but we really look at ourselves as natural farmers. I wanted diversity which was  one of the ways to have a healthy, natural environment. I followed my thing that slow growing animals and plants are healthy and taste better” Jody believes that old varieties of plants and animals are perfect for this. “Most of our animals are either rare breeds or old breeds and a buffalo is an old cow. It produces half the milk but half of the milk is twice as good. It’s got twice as much of nearly everything in it.”

“The obvious thing to do with buffalo milk is buffalo mozzarella,” he says. In fact the farm makes five cheeses – mozzarella, brie, ricotta, blue cheese and gouda. Jody researched the mozzarella process in Italy, visiting eight different producers and milking parlours.  He tells us that the cheese in Italy is really fresh, unlike the exported product that we get here which has spent days in transit. 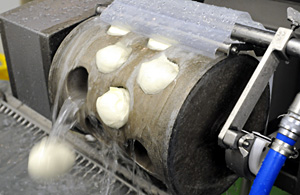 The cheese is made on site at Laverstoke. The milk arrives into the dairy building at 8am from the buffalo and the finished product is ready to go out the same day. It’s very fresh and has far less food miles than anything imported.

The taste of the cheese starts with the soil though. In fact, everything for Jody starts with the soil. “I wanted to study the soils. I felt that the soil was 90% of farming. If you’ve got healthy soil, you’ve got a healthy crop, healthy animals and healthy people and it can’t be anything different. I built up a lab and kitted it out with a doctor of microbiology and a doctor of chemistry (to study the soil).”

He has 7 acres dedicated to compost and the farm is licensed for 25,000 tonnes of compost.

“Soil to most people is dirt but soils are very complex – probably the most complex biology you can get anywhere and so when I looked and when I based how do we do the chickens or how do we do the pigs it was really about taking them all back to nature. For thousands of years that’s the way it was and that’s the way it worked so well and it’s only in the last 68 years that thing have changed so dramatically that I think we’ve gone down the wrong path.”

Organic is the only way forward for Jody. “Organic got a name of being  what I call a Gucci product – only the film stars and singers. The thing that actually brings it home and explains it much more than anything is ‘organic is what your grandmother called food’ and that’s all it is,  it’s just natural food – it’s got to be the right way.” 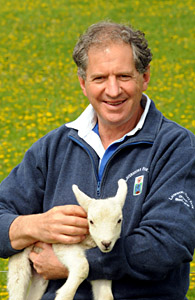 He’s not the only one that thinks so. “We are working with a lot of the top athletes and we are working with Saracens.” he says.  “The players get a box each week. It used to be about supplements but now it’s about good, proper food. That’s quite exciting for us.”

You may wonder what a racing driver is doing running a farm but there are more parallels than you might think. Slow growing animals and plants may be the antithesis of hurtling around a race track at the fastest speed you can manage but his passion for racing has become a passion for farming, and his love of cutting edge technology is evident on the farm. It’s not all slow in farming either. “It’s a combination,” he says. You want to make certain things slowly and  most of our grasses are slow growing and old varieties and most of our animals are the same, but when you come into production, although you want to mature the cheese or mature the meat for a long period of time you still want to be doing it efficiently.”

His son Tomas followed him into motorsport and has now followed him into farming. Tomas too has brought lessons from the racing world into the way things are done at Laverstoke. He took lessons from pit crew efficiency and  improved the way people were working whilst making jerky. Before his son worked there, the layout of the food production had not been the best it could be.  A change to where each stage was completed made all the difference. As Jody said: “Instead of taking 2 minutes to change the tyres they were doing it in 30 seconds and doing it better. There’s a lot of obvious common sense but you need to watch it and practice it.”

“Organic is what your grandmother called food”

“Trying to do the best all the time, that’s what it was I suppose in racing that motivated – you were trying to beat everybody all the time and you’re trying to make the best of whatever you make. We make a lot of things that are rated the best.”

To get your hands on some Laverstoke products, visit www.laverstokepark.co.uk or pop into the farm shop near Overton, RG25 3DR