For the first time in five years Chris Beardshaw will be back at Chelsea Flower Show with a show garden for the 90th anniversary of Furzey Gardens near Minstead.

The woodland theme reflects the character of Furzey Gardens and  because the soil at Furzey is ericaceous, the planting will feature acid loving plants such as rhododendrons, azaleas, primulas and acers.

“Our aim is to capture the unique essence of Furzey Gardens which will engender the same feeling of peace and tranquillity that envelopes visitors as they wander round the paths and secret corners of this special garden,” says Chris. 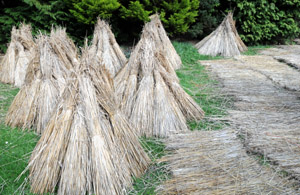 Plenty of preparation has been going on at the gardens. The horticultural team have potted up hundreds of herbaceous plants including foxgloves and candelabra primulas and around 30 shrubs have been carefully dug up to take to the show grounds.  The team are also are sourcing some rare Rhododendrons that were once to be found in the gardens but have since been lost.

Master thatcher Simon Sinkinson has been busy creating wooden structures that will create interest in the garden. He has made a wooden bench with a fairy door and a Lantern building which will be thatched on site.

Students from the Minstead Training Project have also been getting stuck in growing plants. The project gives horticultural training to young people with learning difficulties and the Chelsea garden is  a great challenge for them.