Viking Cruises is again partnering with Hampshire Garden Designer Sarah Eberle to create a travel-inspired  garden for the RHS Chelsea Flower Show 2017. The Viking Cruises Garden of Inspiration will reflect the colours,  art and culture of Barcelona, a source of inspiration for Sarah following her previous travel experiences.

The Viking Cruises Garden of Inspiration will combine colourful mosaics, a fluid ‘folded’ marble bench and striking metal sculptures of Agave plants, reminiscent of the work of Barcelona’s most famous architect, Antoni Gaudi, with a vivid mix of blooms in flaming oranges, scarlets and yellows, deep lavender blues and pale lilacs.

“Barcelona is both an amazing destination, but also a city of great culture. There is an incredible amount of modern art built into the city through its distinctive architecture. Gaudi’s designs in particular were inspired by nature so it makes sense to create a garden inspired by his designs,” said Sarah.

For the past four years Viking Cruises has entered a garden at the RHS Chelsea Flower Show to reflect the colourful voyages of discovery guests can enjoy on board their ships. This year Sarah and Viking Cruises are collaborating again following their gold medal winning performance in 2016, which saw Viking’s Mekong Artisan Garden scoop the prize for Best Artisan Garden.

Wendy Atkin-Smith, Managing Director of Viking Cruises UK said: “The Viking Cruises Garden of Inspiration will
bring all the vibrancy and excitement of Barcelona to life. This city is always a popular destination with our
guests, and we are delighted Sarah is drawing inspiration from its distinctive art and culture.” 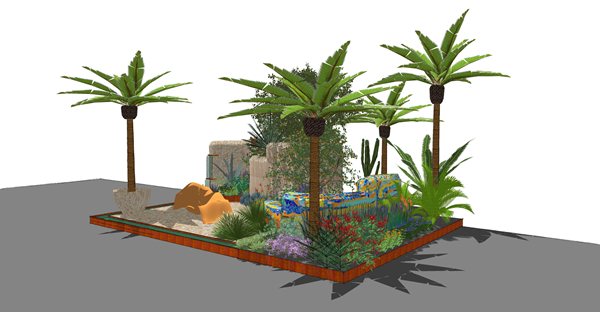 Planting/Colour Scheme
Date palm, citrus and architectural arid plants and succulents. A range of Mediterranean perennials including Isoplexis canariensis in tones of orange.