Come the third week in May, four Main Avenue gardens will be resplendent with Hortus Loci plants and trees. This year Hortus Loci MD’s Robin Wallis and Mark Straver are backing the crop of ‘young gun’ designers whose work seems to be creating the biggest buzz in 2014.

Matthew Childs won best in show at last year’s Hampton Court Palace Flower Show for his Ecover Garden with plants grown by Hortus Loci so it was no surprise when Brewin Dolphin asked Matthew to design their third main avenue garden that he opted for Hortus Loci expertise again!

Hugo Bugg has gone from strength to strength since his RHS Young Designer of the Year in 2010, since then commissions from luminaries such as, world class architect Renzo Piano and the Royal Botanic Gardens of Jordan, have rolled in but this will be his very first Chelsea Flower Show garden (sponsored by Royal Bank of Canada) and when it came to choosing a nursery to work with Hugo said there was no question of it being any other nursery but Hortus Loci. 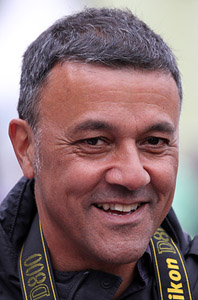 Cleve West’s garden for M&G Investments will be closely watched as all wait to see if he can score a horticultural hat trick and win his third ‘Best in Show’ accolade! Hortus Loci plants have helped him thus far so the pressure is on for all concerned to ensure each and every plant is in optimum condition when delivered to the showground as part of the intricate articulated lorry ballet that the Hortus loci show team perform each year!

The nursery is also growing for The Cloudy Bay Garden designed by Andrew Wilson and Gavin McWilliam. For each show garden they will produce approximately 10,000 plants, way more than will ever be used but specimens have to be pristine with no margin for error if they are to be judged favourably by the strict RHS Judges. All four sets of designers have been with Mark on tagging trips to Belgium / Germany and to choose the best trees and shrubs and all of the teams make regular trips to the nursery to check on their precious plants and make tweaks wherever necessary.

In addition to the show gardens the nursery will also be supplying at least ten major trade stands on a select and deliver basis including Alitex and the Thomas Hoblyn designed Gaze Burvill stand which is the largest trade stand at the show.

As always Hortus Loci’s retail nursery Whitewater Plant Centre, situated on the same site, will be showcasing the ‘Best of Chelsea’ – designer plants from the third week in May, so plant enthusiasts can ‘get the Chelsea look’ without even visiting the show!