Her Majesty The Queen’s Diamond Jubilee was celebrated at Exbury Gardens on 9th and 10th June, when children collected petals to form a giant Jubilee Crown, under the watchful eye of the National Association of Flower Arrangement Societies (NAFAS).

Each child who collected petals and leaves for the collage was given free seeds and a chocolate treat. 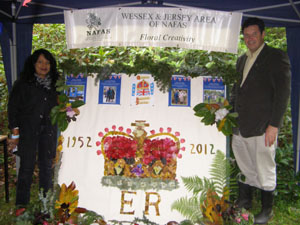 Nigel Philpott. Exbury’s Commercial and Marketing Manager said: “The Diamond Jubilee Crown collage was a fitting way to mark the finale of our Jubilee celebrations. Last weekend the Gardens opened a new pathway, Jubilee Walk, linking the Jubilee Pond with the Hydrangea Walk. The pathway gives a different feel to Exbury, passing many mature oaks whilst it also has open views over the Jubilee Hill Cascades. A new interpretation panel has been positioned drawing on the ‘Royal Touch’ at Exbury, showing images of The Prince of Wales (later King Edward VIII), and HM The Queen, recalling previous royal visits to Exbury and the Exbury lore that on each occasion it is guaranteed to rain!” Mala Williams from NAFAS was delighted that so many children joined in the Petal Fall tradition: “We welcomed lots of children to our stand who had collected petals representing all colours of the rainbow, together with leaves, sticks, moss and lichen. We were thrilled with the finished ‘Jubilee Crown’ which we’ll leave on display at Exbury throughout the week.”

Petal Fall weekend marks the traditional end of Exbury’s high season and the beginning of flowering in the herbaceous beds, Exotic Sundial Garden and Summer Lane Garden. “But just because the rhododendron season is drawing to a close doesn’t mean that there’s nothing to see at Exbury,” said John Anderson, Exbury’s Head Gardener. “The woodland walks and views are as lovely as ever and we have some fabulous herbaceous beds, the Exotic Sundial Garden, ponds, a bog garden and many surprises at every twist and turn of the paths. Visitors who take a ride on the train will also enjoy the Summer Lane Garden, which is nearing its best now.”