Leopold de Rothschild died on April 19 aged 84. He was a member of the Rothschild banking family and had a distinguished career in finance; however his greatest passions were classical music and steam trains and he was well known as a leading musical philanthropist.

Leo, as he was known, was born in London on May 12 1927 but he was brought up mostly at Exbury House, on the estate his father acquired in 1918. His father created the 250-acre Exbury Gardens on the land and they are now famous for the many varieties of rhododendrons and azaleas contained within them. 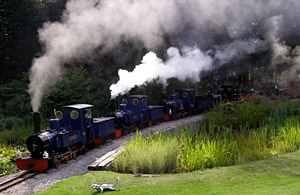 One of Leo’s great passions was steam trains and at Exbury, he built a narrow-gauge steam railway. Since its opening in 2001, over 500,000 people have ridden on it.

In 2004 and 2008 Leo invited The Queen to Exbury to ride on the footplate while he drove the engine, dressed in his Exbury Gardens Railway boiler suit and cap. He marked another royal occasion at Exbury in 2011 when HRH The Prince of Wales and The Duchess of Cornwall visited to help celebrate the railway’s 10th anniversary.  A record 63,000 passengers rode the ‘Rhododendron Line’ that year.

Leopold de Rothschild was unmarried and had no children.  He was always close to his family. He leaves at Exbury a wonderful steam railway line that has given pleasure to thousands of people and it will continue to give pleasure to many thousands more.