Sparsholt College has announced their partners and ‘Mighty Greens’ garden design for this year’s RHS Chelsea Flower Show, 23-27 May 2017. The College has joined forces with salad brand Steve’s Leaves and the University of Southampton, where research on watercress and other leafy salad crops has been underway for the past decade. The Mighty Greens garden will showcase a range of edible plants used in salad mixtures, together with the development of watercress, Nasturtium officinale, from traditional Victorian street snack to the cutting edge work of the University of Southampton in cancer prevention.

A team of eight Horticulture students designed and created the garden which will feature a display divided into three main sections: growing, preparation in the kitchen and dining. Visitors to the world-famous flower show will see the exhibit in RHS Discovery, which aims to educate visitors as well as demonstrating high standards of plantmanship. Horticulture expert Chris Bird who is leading the student team said: “RHS Chelsea Flower Show is the most famous show of its kind and whether an experienced high-profile designer or those embarking on their horticulture career, it is an incredible and career enhancing experience. This is the culmination of two years’ study for our students, requiring them to draw on all of their advanced technical skills and experience. Our purpose at Sparsholt is to train the next generation of horticulturists and what greater start to their careers then having their work showcased at such a prestigious international show.”

Commenting on the value of partnering up with Sparsholt College to exhibit the diversity and range of Steve’s Leaves’ famous salads and herbs which will feature throughout the garden, Tony Reid said: “Steve’s Leaves is all about tasty, healthy delicious leaves and this initiative with Sparsholt College is tremendous because it brings new and exciting leaves to the public while supporting the future of growing”.

A number of unique watercress-crosses developed by co-partner, the University of Southampton will also feature in the Mighty Greens garden. Professor Gail Taylor, whose laboratory has discovered novel wild varieties of watercress that are now being trialled for future release said: “The University of Southampton is delighted to support Mighty Greens, as it enables us to illustrate our ground-breaking work on watercress which is leading to the development of unique and novel varieties with improved flavour and better health giving properties”. A treat for visitors to the garden will be the opportunity to officially name one of the University’s new varieties of watercress which will be making its debut at RHS Chelsea. 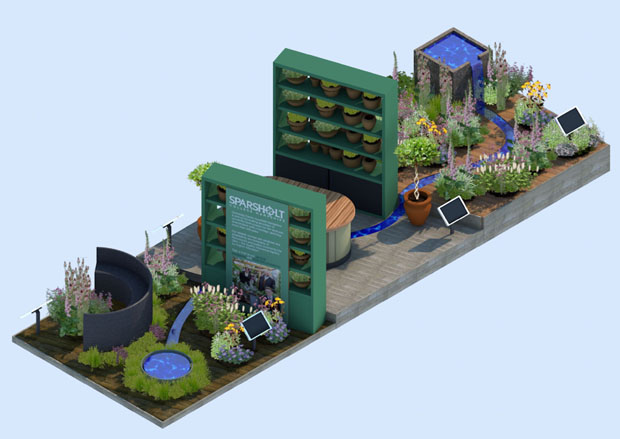 A number of horticulture courses are offered at Sparsholt College and University Centre Sparsholt, from Apprenticeships through to the BSc (Hons) Horticulture with Plantsmanship and Design (Top-up). A leisure programme also provides ample opportunity for those looking to try their hand at a new skill or develop a long-held interest.

Find out more their full range of Horticulture courses please go to www.sparsholt.ac.uk/subject/horticulture/