Spring has sprung at Sparsholt College

Thousands of visitors  attended Sparsholt College’s Lambing Weekend and they may well have thought that Spring had indeed come early. As the campus basked in glorious sunshine nearly 6000 visitors enjoyed very close-up views of newly born lambs and some were lucky enough to see one, twins or even triplets actually arrive.

Sparsholt’s shepherd John Garrett provided a running commentary explaining the lambing process and happily taking questions from inquisitive visitors. Working alongside John, were the College’s agriculture students who are all learning the intricacies of lambing as part of their curriculum studies. It is this well-earned expertise which will stand the students in good stead when they work the traditional lambing season later in the year. 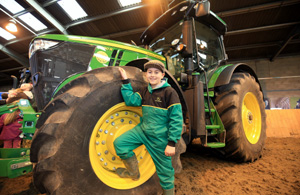 Principal Tim Jackson said: “Once again, our Lambing Weekend has proved a huge success. We often see familiar faces who come back each year to enjoy the lambing activities. I can’t imagine there are many opportunities for people to get so very close to a new lamb and to actually witness one being born is incredibly special indeed. We had 66 lambs born over the weekend and there were a number of occasions when visitors let out a collective aaaaah as they saw a new lamb arrive.”

Having cooed over the lambs there was still plenty of activities to keep everyone entertained. The vast array of College tractors to explore was every young boys (and some girls) dream and the pony rides proved particularly popular with both seasoned and would-be young riders. The College dairy was open for milking demonstrations and the young calves drew quite a crowd as visitors explored this facility.

Over in the Game and Wildlife Centre there was metal sculpting, make your own biodegradable plant pot and face painting. All of which were provided by either Sparsholt students or lecturers from the Motor Vehicle, Horticulture or (Andover College’s) Beauty Department.

For those who were inspired by what they saw and are interested in finding out more about the courses offered by Sparsholt College, the next Open Say is Saturday 7th March 2015, 10.00am to 3.00pm. Go to www.sparsholt.ac.uk for further information and to register.