Top Gun of the Sky launched

The official launch of Top Gun of the Sky took place at the Hawk Conservancy Trust on 9th November.

It is a poem based children’s book seen through the eyes of a Peregrine Falcon, written and illustrated by Fawley Refinery employee Martin Bradley.

It is the first book Martin has ever had published and it’s purpose is to raise money for the Hawk Conservancy Trust and to help children learn more about this amazing bird. 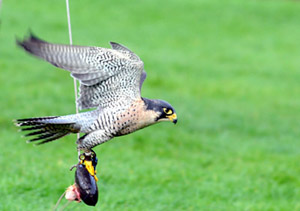 Martin is passionate about peregrines. He loves them because “they are the fastest animal or bird that has ever lived and seeing them in the wild is just spectacular. I was probably about 12 and I saw my first peregrine at the Fawley Power Station at Calshot and now I’m lucky enough to see them at work everyday at Exxon in Fawley.”

The story really started with some drawings he produced. His two boys, Jay and Max, looked at them and said “dad you’ve got to do something with these”.

This got Martin thinking; “Some of our best family days have been at the Hawk Conservancy Trust. We’ve been coming here for many years,” he said. “I thought wouldn’t it be great if I could tailor my passion with the work that the trust does.”

“They are the fastest animal or bird that has ever lived”

“I also recalled some work that the trust had done locally. I’m from the waterside in Dibden Pulieu in Southampton and the Trust were involved with rescuing two peregrines from the stack at the power station. Two peregrines had fallen from their nest, two fledglings, Gucci and Prada, and they were brought here and the Trust worked on them and thankfully one of them was released back to the wild.” 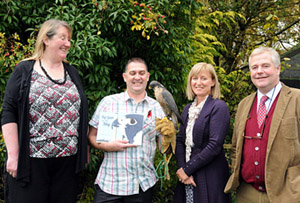 Martin spoke to Penny Smout, CEO of the Hawk Conservancy Trust and Ashley Smith, Executive Life President who both loved the idea and helped Martin present it to ExxonMobil. They bought into the idea and supported Martin, funding the printing of the book.

Alison Jones, Community Affairs Manager at ExxonMobil said: “I am delighted to be able to support Martin and his endeavours with his new book.”

Penny said: “I really think it does peregine falcons justice. I think the book is a really powerful message and it really supports what we are trying to do at the Hawk Conservancy Trust. He is hugely talented and creative and I have great admiration for what he has accomplished. As the Hawk Conservancy Trust is getting a lot of benefit from this book we are deeply grateful that he has supported us in this way.” 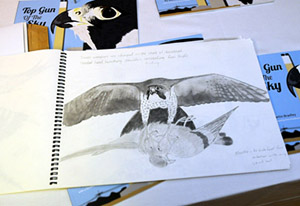 What’s the book all about? Martin says “It’s simple really. It’s raising cash for the Hawk Conservancy Trust and the work that they do, and along the way, lets try and engage kids in such a wonderful subject and you never know, they could have a good read, pick up a pencil and do some drawings themselves and hopefully come along to this wonderful place and be inspired like I’ve been over the years.”

“It’s both innovative and clever and provides a novel and exciting way for young people to learn more about this bird.”

Naturalist and TV presenter Chris Packham wrote the foreword and he said: “This super book uses bold and brave graphics to illustrate a poem which describes the wonderful Peregrine and its world. It’s both innovative and clever and provides a novel and exciting way for young people to learn more about this bird.”

Amongst other places, you can buy the book from The Hawk Conservancy, Waterstones and Ceratopia Books.

A framed, signed picture from the book was presented to ExxonMobil and it will hang in their reception.