There is always something new to marvel at on the Hardy’s Cottage Garden Plants stand at the RHS Chelsea Flower Show and in 2015 this remains true. In addition to Rosy’s mesmerising display of faithful herbaceous perennials, visitors also come to see newer introductions and of course the brand new plants getting their 1st outings and in some cases world debuts!

The yellow-leaved Pyracantha ‘Golden Paradise’ produces white flowers in early summer followed by orange berries. Evergreen foliage appears with a red flush and brightens to yellow during the summer months fading a little in autumn and over the winter. This plant is unusual addition to any garden, it grows to approximately 1.5 –1.8 metres in height in 10 years and will retail at £9.99 for a 2 litre pot and £5.00 for 9cm pot. 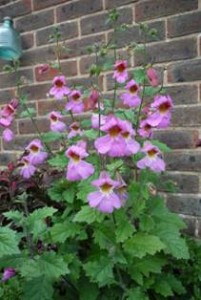 Rehmannia Walberton’s Magic Dragon is another world class introduction from David Tristram at Walberton Nursery. He crossed the rather tall Rehmannia elata with the much shorter Rehmannia glutinosa and after 8 years of re-crossing and selection, David has produced a plant with a manageable habit (70cm). The exotic, 6cm wide flowers are sterile so they appear continuously through summer.

R. Magic Dragon has hybrid vigour and is easy to grow in sun or part shade in any reasonable soil. It has survived the last 4 winters outside, re-growing from ground level in spring and plants that are cut back during summer will quickly re-grow and flower again.

The ‘Best of British’ section of the Grand Pavilion aims to highlight and celebrate British nurseries, British growing and British horticulture, this is a theme that very much embraces the Hardy’s Cottage Garden Plants ethos. Besides growing for their own stand, Hardy’s are also growing for several of the major show gardens including Adam Frost’s Homebase garden, Serena Freemantle’s Future Climate Artisan Garden and Martin Anderson’s Motor Neurone Artisan garden.