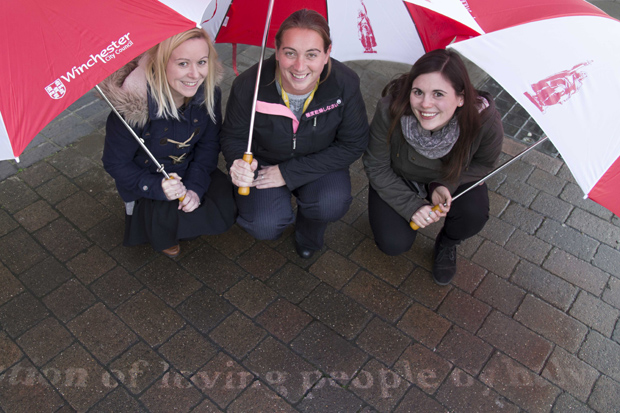 An innovative new trail to raise awareness of a programme of events across Hampshire to mark the 200th anniversary of local author Jane Austen has been commissioned by Winchester City Council and sponsored by Winchester College and the Jane Austen Society of North America.

The trail, the brainchild of AR Design Studio in Little Minster Street, is created in a special outdoor paint that will appear only during periods of rainfall. It consists of 12 quotes from the author appearing in 36 locations across the city centre. A ‘living wall’ of ivy in the garden opposite the house in College Street where the author died will present an additional quote in the series. A new bench from which visitors can view the installation has been handcrafted by local sculptor Nicola Henshaw, following a workshop with pupils from Winnall Primary School.

The trail, part of the Council’s Feet First campaign to encourage walking, is intended to build local interest in the author’s work, remind people that she lived and died in Hampshire and support local businesses who have called for ‘shoulder season’ campaigns that encourage footfall across the cityscape.

Cllr Steve Miller, Winchester City Council’s Portfolio Holder for Economy and Estates, said:
“Jane Austen attracts considerable media interest for Winchester and we know many of the increasing number of inbound tourists come with an Austen based itinerary in mind. Each year thousands come to Winchester to view her ledger stone in the cathedral and the house where she died in College Street, and to make the short trip to Chawton in East Hampshire to see her and her brother’s homes in the village – now Jane Austen’s House Museum and Chawton House Library. There is also an important local audience who take part in an ever-increasing number of cultural events, so we are sure Wintonians will also be keen to join in the fun next year.

We are very appreciative of the sponsorship for the Rain Jane trail by Winchester College. My officers have enjoyed working with a network of local businesses with a range of specialisms on this very innovative tourism project. Hillier Nurseries, for example, have grown and donated the ivy that creates the backdrop for the College Street artwork. We have a remit to support businesses in the District and, as well as using Winchester based organisations to fulfil the various aspects of the trail, this campaign answers some of the calls from retailers locally to support them across the ‘shoulder seasons’ between September and November and January to March. We’ve had a hugely positive reaction when we have spoken to businesses about this project.”

Andy Ramus, of AR Design Studio Ltd said: “Jane was a Hampshire girl and the upcoming programme of events is about reclaiming her in the county she was born, spent the majority of her life and wrote and finalised all six of her novels. Sadly she died at just 41 years old and we wanted to mark the fact her life was cut short with this temporary installation.

AR Design Studio is proud to be a Winchester business and we’re always looking for innovative ways to invest back into the city. Hopefully local people will experience a sense of delight and surprise as they unexpectedly come across her words and her wit. The quotations have been carefully placed in strategic locations chosen by Visit Winchester and the team here – many that have an ironic link to the words so there is an ‘in joke’ about society in general that shows how relevant her work still is.

We are indebted to Winchester College for sponsoring this trail and allowing us to use the garden for the temporary installation opposite the house where Austen died in College Street. The quote in the garden and the bench to view it from are intended to offer a quiet and unobtrusive place of reflection – and also to pull people away from the windows of the private house. This project is the coming together of a diverse group of Winchester district organisations to sensitively celebrate the heritage of the city we are all so proud of.”

One of the highlight events in 2017 will be ‘The Mysterious Miss Austen’ – a world class exhibition at Winchester Discovery Centre Gallery curated by Hampshire Cultural Trust. Five reputed portraits of the author will be brought together for the first time plus manuscripts, letters and the pelisse coat that is one of the only garments in the world with provenance that can be traced back to Austen. The ground floor of Winchester’s City Museum is also being refurbished over the winter to give greater prominence to the much-admired objects associated with Jane Austen in the city that provided her last home and final resting place.

The free Rain Jane leaflet is available from Winchester Tourist Information Centre during opening hours and downloadable from www.visitwinchester.co.uk.