Michael Buck and Pedro Mayor are the show plant managers for Hortus Loci, growing plants for the 2015 Chelsea Flower Show.

“We grow roughly 10,000 plants per designer to get the best quality we can for the 3,500 plants per garden,” says Michael, showing the sheer scale of the operation of their Hampshire nursery.

The Chelsea cycle starts in September when the nursery is approached with plant lists from designers. It’s so early that the sponsors of the show gardens may not even be known yet.

“We manage expectations from the very get go when we get the lists and we manage expectations right through ,” says Michael. That’s an important part of growing show garden plants because “working with plants nothing’s 100% as so many things could change,” explains Pedro.

A plant could work but designers need a plan A, B, C and D because some of the potential issues may not even occur until a few days before the show.

“The key risks are pests, diseases, mildew, aphids. The key is to keep everything clean. The weather we can’t control so we are always checking it and watching that there are no frosts. They can occur at any time, especially around this time of year, and it’s not uncommon to have snow in April. The weather is probably the biggest risk,” says Michael.

The nursery need to grow plenty of extra plants too. These are the plants that are not on the designer’s lists but they might get chosen as the show gets ever closer if plan A doesn’t quite work out. 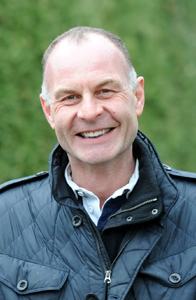 So how difficult is it to get plants ready in perfect show condition? -“It’s years of experience from (owners) Mark and Robin – when to take the plants outside. It’s different every year. Last year was a mild winter and  very wet and we had a really nice spring. This year it’s not too bad- a nice winter. The skill is knowing when the plants usually flower – you move outside one plant and then you have to move it in again. You need to play with that,” says Pedro.

It’s all about planning ahead and hedging your bets too and staggering planting times. “Sometimes we pot up one batch one week and after two or three weeks we pot up the next wave of plants.”

If 2015 gives a hot spring, the first wave could be over but the second wave will be perfect- it’s all a constant balancing act.

Michael says: “We will be walking around with Mark probably once a week at the moment and nearer the show, probably about 6 weeks before, it will go to 2 times a week and then it will obviously become every day the closer we get because we will still be needing to move plants.” They might be taken outside or put in shade to try and slow them down or moved into sun to speed them up.

Working in the nursery, the pair get to see some great plants and they enjoy seeing how the designers incorporate them into their gardens and how they use their colour palettes.

Great planting combinations can be seen at Chelsea. Pedro said: “Last year the Iris Gerald Darby looked great in Hugo Bugg’s garden – he used a very nice wave of iris and I really liked how he used it in between (the rush) Juncus inflexus.  He used around 300 iris Gerald Darby and 300 Juncus. It was a different combination.”

“One of my favourite plants though  is Angelica archangelica – it has a nice structure and it grows very big, I just love it. Then there’s Astrantia major Claret – it’s a really nice deep red. ”

Michael likes the Papaver dubium subsp lecoqii var albiflorum with Melica altissima Alba.” I think that really is quite a magical combination. It moves in the wind. The way it catches the air adds another whole dimension to it and I’d certainly have it in my garden. The papaver is a single pink annual poppy. It grows about 2.5/3 feet and it’s nice to grow through grasses. It was quite a triumph last year and became one of my favourites.”

“We like to have new strains here and differences. It keeps the judges on their toes as they might not have seen it before and that’s what  Mark and Robin aim to do – the odd show stopper here and there like the leccociay poppy.” 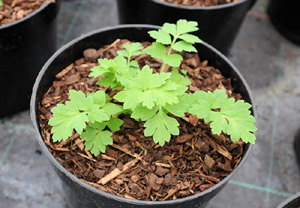 Some of the star plants for this year are Papaver somniferum Black Peony and Meconoposis cambrica. “It’s a very nice papaver. It’s an annual plant and it grows between 1.5 and 2 metres so it’s a very tall poppy and it has a very dark flower similar to a double flower peony. It lives only one year but it self-seeds if it’s in the right place,” said Pedro.

The yellow Meconoposis cambricais for Wilson McWilliam. “It’s quite difficult and we’ve never grown it here before.  It doesn’t flower for that long and being such a key plant it really will be a challenge. It’s to depict the gold off of the Wellington uniforms so dotted through the garden you will be able to pick that up and relate it to what they’re trying to do there,” said Michael.

The Wilson Mcwilliam garden is for Wellington College and will mark the 200th anniversary of Wellington’s victory at the Battle of Waterloo.

Although there’s not much to actually see in the nursery early in the season, the designers come regularly.  It doesn’t take long before the plants will explode with growth. 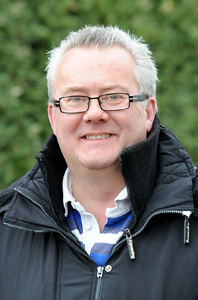 They need their plants to be perfect but they can also look to make some last minute swaps depending on how good other plants look in the nursery – the spares. “There is a bit of plant envy and it heats up about a month before the show because the designers get a bit stressed and think ‘should I have put that in or this one looks good’. Although they are bitter rivals so to speak it’s all good fun. ”

The last few days before the show are the most frantic. The nursery  will have  already done 9 months of work but the designers need to keep the plants  looking perfect for a week.”

“We cannot send plants that will be over. We try to keep them flowering for the whole week,” says Pedro. ” You need to be 100% sure a plant will be OK or it doesn’t go.”

“Picking can be quite a headache,”  adds Michael. “We’re out on the nursery lifting plants to be sorted and distributed,  but we’re looking at them thinking ‘that’s got a fatter bud and will flower without a problem but this one’s already got a flower so will it hold?”

Hortus Loci are growing most of the plants for their 4 show gardens. With a strong track record of gold medals from their past Chelsea designers, 2015 looks set to be another good year for them.

“We love to think that our plants do the talking in the garden” said Michael.